Cataracts are cloudy areas in the lens inside the eye – which is normally clear.Cataracts can develop in one or both eyes. If they develop in both eyes,one will be more severely affected than the other.A normally clear lens allows light to pass through to the back of the eye, so that the patient can see well-defined images. If a part of the lens becomes opaque light does not pass through easily and the patient’s vision becomes blurry – like looking through cloudy water or a fogged-up window.The more opaque (cloudier) the lens becomes, the worse the person’s vision will be – Harvard Medical School 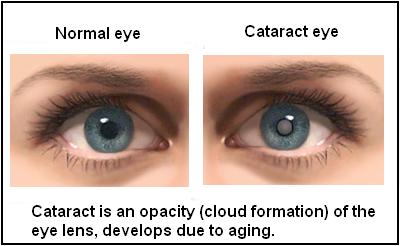 t is the difference between a cataract and glaucoma?

As we age, the normally clear lens begins to thicken and gradually becomes discolored. This condition is called a cataract. This results in a loss of vision, and occurs at different rates in different individuals. Vision loss in glaucoma occurs because of damage to the optic nerve, which connects the eye to the brain – glaucomafoundation.org/info_new.php?id=156&cat=12

Can cataracts lead to blindness?

Cataracts, a leading cause of blindness among adults 45 years of age and older, are a clouding of the eye’s lens. Because of this cloudiness, light rays do not easily pass through the lens to focus on the retina. As a result, things look foggy or cloudy.
-olmstedcenter.org/About/Resources/Causes

There are two types of cataracts:

Any potential help other than surgery?

IMMUNOCAL does help in preventing age related cataracts formation and reversing the progression of cataracts by raising intracellular glutathione. Glutathione is found in very high concentrations in the lens of the eye, and plays a vital role in keeping the lens healthy. Specifically, glutathione functions as an antioxidant, maintains the structure of the lens proteins, acts in various enzyme systems, and participates in amino acid and mineral transport. Glutathione levels are diminished in virtually all forms of cataracts. This was observed by Elena Ganea and John J. Harding in a multi-institutional study that we conducted between Institute of Biochemistry, Splaiul Independentei 296, Bucharest, Romania and Nuffield Laboratory of Ophthalmology, Oxford University, Walton str. OX2 6AW, Oxford, UK.

The strategy of using Glutathione augmentation regimen with Immunocal has been receiving a lot of interests as positive results are noted in many cases.

“Edgar loved to paint. Now retired, he could pursue this hobby full-time if he so pleased. Over the prev
ious years, his wife had commented that the color in his landscapes was too loud. At first he did not believe he had changed his techniques, but a side-by-side comparison with earlier works proved him wrong. Still, he felt the colors in previous paintings were “weak.” A routine check revealed cataracts. One eye required surgery, the other was “not yet ripe.” After surgery he eventually recovered excellent vision, but post-operative complications left him hesitant about having the same treatment on the other eye. His wife did some homework, learning about glutathione augmentation and cataracts. She started him on a glutathione augmentation regimen along with Immunocal. One year later, his ophthalmologist was baffled by the unusual observation that the cataract was less dense.” Edgar’s wife learned that a healthy eyeball is very high in glutathione. An unhealthy eyeball, or one with cataracts, is an oxidized eyeball, or an eyeball that has been affected by oxidative stress. An oxidized eyeball is low in glutathione.

So, among the many other benefits you can expect from IMMUNOCAL Whey Protein

, add vision protection to the list as it helps the body produce optimal level of Glutathione. See a Doctor ask for IMMUNOCAL. Do all possible to safeguard your precious eyesight. Act now, keep seeing tomorrow.

Question on this mini forum are responded to within 48 hours, use our live chat service for inquiries on the go.